To make it simpler, we’ve created a grid of important terms and issues that can form a basis for a shared language. This will make it easier for everyone – from technical experts to policymakers to the public – to be able to participate in the conversation on facial recognition.

Many things come under the umbrella of ‘facial recognition technology’: using your face to unlock your mobile phone, using a shop or a bar’s security camera footage to match against a watchlist of possible shoplifters, checking someone’s age when buying alcohol at self-checkouts, or using an airport e-passport gate. All of these are called facial recognition technology, but there are significant differences in how they work, the data they use, where they happen and who is in control of the system.

These four dimensions help clarify different cases of facial recognition technology, and the issues that surround them:

Facial recognition technology usually refers to using advanced statistical analysis on images of people to do one (or more) of the following tasks:

Apple’s Face ID lets you unlock your phone with your face. This is an example of facial identification for authorisation. This differs from Facewatch, a facial recognition security system for businesses, which does facial matching of CCTV footage against a watchlist of ‘persons of interest’. Facial ‘emotion’ recognition has been in the news after use by Unilever in the UK for job interviewing. This is classification of facial images according to expressions – a smile, a frown – though the claim that this can then be used to identify emotion is highly contested.

Facial recognition systems are biometric systems – they use biometric data, which is sensitive as it’s very personal and based on biological characteristics that are hard for people to change. If someone finds out your password, you can change it. But if someone has a recording or photo of your face, you probably don’t want to change your face. Many people already have photos of themselves on the internet, and it can be hard to spot if you’re recorded by CCTV, making it difficult for people to know when their data might be collected or subject to facial recognition technology.

There are also specific considerations around training data – which is initial data used to develop a machine learning model for facial recognition, often referred to as ‘training’ the model. This is typically a set of images or features already labelled by a human that the model can ‘learn’ from. Additional considerations here include how representative the images are and the risk of bias – if one group of people is over/under represented in the training data, the system might be better/worse at recognising them.

Facial recognition systems can be used in different environments or scenarios – such as in airports, bars or out on the streets. This can be called the deployment of the system. Some ways to think about these different deployments are:

Sometimes the technology will be used for more than one of these purposes (just as it could do more than one task), and will likely face multiple data considerations. Identifying what those purposes are, however, is important to framing the discussion and pinpointing causes of excitement or concern. A technology or system may be helpful for one group’s purposes, but problematic when used for the purpose of another. 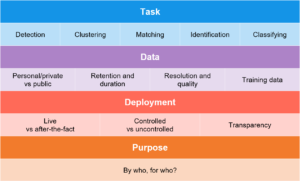 We’ve also put the table of terms and definitions on GitHub and welcome contributions.

Thanks to William Isaac from Google DeepMind for feedback on a draft of this piece.

Matthew Ryder QC is leading an independent legal review of the governance of biometric data, commissioned by the Ada Lovelace Institute